According to Public Health England, over the last 7.5 months, there have been 593,572 cases and 2,542 deaths in England due to the delta variant.

Of those delta cases, 48% were unvaccinated, and 52% were fully vaccinated or partially vaccinated (I removed the undetermined cases Johnson mentions).

Of those delta deaths, 63% were fully vaccinated and 28% were unvaccinated.

From the CDC’s Vaccine Adverse Event Reporting System (VAERS), there have been over 15,000 deaths due to the COVID-19 vaccines.

The VAERS system has recorded a total of over 725,000 adverse events due to the COVID vaccines over the last 10 months. 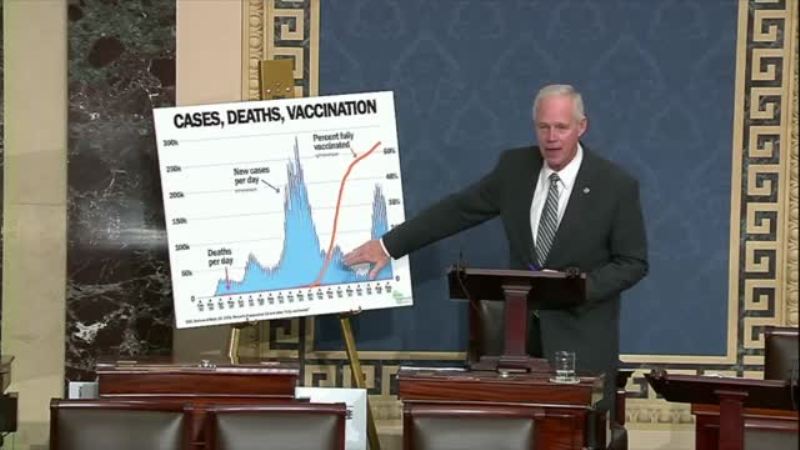 AFVET8700
Sen. Johnson should be filing criminal referrals against the CDC & FDC for withholding & falsifying data…but since we no longer have Justice Dept. the Left would just use that as “proving their innocence”.
Alas, it seems, The People are going to have to do it themselves. Start recalling every Democrat in office, local-state-fed. File criminal charges against them for killing our People.

RumbleIsDeepState
That being the same year Fauci knew Trump would be dealing with a pandemic is pure coincidence I’m sure. I want an answer to why Trump signed EO 13887 in Sept of 2019. Who suggested this to him was dire months before a pandemic ever occurred to the point it needed an EO?

Caitlin25
Thank you for this post. You are one of the rare reps who is telling the truth. I am a former Democrat now as I truly believe that this pandemic has been orchestrated and the data have been manipulated and this is really about power and money as always.

Whitmersgottago
Me as well, Caitlin. Became independent around 15 years ago but voted mostly democrat. I voted republican on the whole ticket for the first time because of Trump, but also because the scamdemic opened my eyes.

SteveJepson
COVID-19 has been used as political warfare since day one – if not before! There is no question that this “pandemic” is the fundamental basis of a Flu d’état! The lies about it are so big that no one can believe they are lies. The Truth is being intentionally obfuscated. The only “science” the government is interested in are the lies that can be generated for the sake of political science.