“The last time a vaccine and actual vaccine, these aren’t vaccines, was rolled out into the human population…”

This. Is. Criminal. No wonder they wanted to keep it hidden for 75 years.

“We need to deconstruct these organizations and rebuild them. Yeah, they’ve been bought and sold. I think it’s by design. I absolutely think that. I think the kind of people you guys see them, I mean the kind of people who are really answering all the questions that the legacy media are providing to the public. They don’t seem to have any empathy. They don’t seem to still be connected to the concept of being a human being. We’ve never since the inception of VAERS seen numbers like this before. And as you pointed out, the last time a vaccine and actual vaccine, these aren’t vaccines, was rolled out into the human population and caused deaths, like the cut-off numbers always been 50 people, if you kill close to 50 people with a pharmaceutical or biological product, which vaccines are, then that product gets pulled. That’s the job of the health officials, and the biologics people is to make sure that the products that go into people aren’t killing them. That’s kind of an important job, right? Because this is all in the name of public health, right? We want everyone to be healthy. So now we’ve exceeded 28,000 deaths. That’s just the deaths in VAERS, not including the underreporting factor, which is a known thing in VAERS.” – Dr. Jessica Rose

“There are two documents that I’ve found in there so far that do reveal a hailstorm. One of them was released on November 17th. And I’ve written a couple of substacks on this. This is where they clearly show that 3% of the people in the original group died. DIED. Oh, and here’s another statistic that was really funny to me that I didn’t realize. 22% of the participants in the original 42,000 have an unknown outcome. So one quarter of the people have an unknown outcome. What the hell is that? The first red flag that everyone should be alarmed by, no matter what your take on any of this, no matter what, is if it’s a pharmaceutical company that’s basically in charge of the entire human population right now. And that’s true. Um, is asking not to reveal its safety data for 75 years. You should get concerned. Because the only reason anyone would ask not to reveal safety data is if they’re afraid of what people are going to think about the safety data.” – Dr. Jessica Rose

“If they had nothing to hide…”

“Of note, in what was previously considered the worst vaccination program ever, the CDC pulled the 1976 swine flu vaccine after 362 people came down with Guillain-Barré syndrome (out of 45 million shots).”

“The whole things a lie the numbers are fake manipulated and all for money.”

“That’s only an estimated 1-10% of the total adverse deaths.”

“And all the animals in MRNA trials died, so it was a NO for me. Pretty fooking easy. So did the first nurse that passed out on TV after getting the experimental bioweapon frankenjab. RIP” 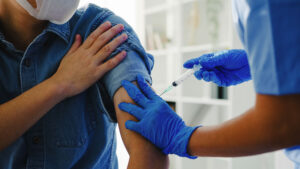