This program is dedicated to the memory of Brandon Watt of Ontario Canada, his wife and children.

A new study out on Jan 25th in JAMA shows that the mRNA vaccines elevate the risk of myocarditis by 133x above background rates.

This is particularly true for men/boys, with a median age of just 21 years.

This study almost certainly is an undercount of the true risk elevation. The VAERS data is notorious for being a fraction of the true rate of adverse event incidence. This has been true every single time a study in VAERS is conducted. You’d think the CDC would be at least somewhat interested in how badly this system operates, but you’d be wrong. They are, instead, more concerned with burying the data rather than surfacing better data and then studying it. 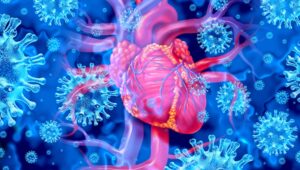 Geann Freeman
This is why the people in Canada are right and justified in protesting mandates.

d
Doctors are supposed to evaluate each patient as an individual. There is no mass solution to any problem, well, some guy in the 1930’s thought there was, but we all know how that went. Peace, power, and freedom to all.

R Gray
My cousin had a massive brain bleed 2 weeks after the vax. He was 75, but his mother lived to be 93 and his dad, my uncle, lived to be a month short of 100, (common in my family). My son, 6’2″, weighs 180. Worked out and ran daily, got a massive clot in his calf the day after getting the vax. They stopped it, but he’s now on blood thinners. I’m 73 and I’m one of those silly “vax” hesitant people. Wonder why.

FarmGirlRebel
My nephew presented in the ER w/myocarditis 6 weeks after Moderna. He was required to get the vax for University and National Guard and was in tip top shape. Not any longer. He now struggles to walk between classes.

Cacaonut
One scary thought that occurred to me in regards to underreporting of myocarditis cases is that a lot of individuals simply wouldn’t go to the hospital because they cannot afford to. In America, these mRNA injections are free. Healthcare is not.

TDT Records
My heart goes out this man, his family and to all those in any similar
transparency and openly speaking about things is SOOO important !!!!

Joel
I am unvaccinated because I knew they did not spend nearly enough time to test it and the fact the companies negotiated for and received immunity. Having said that, I got covid last December along with 17 others at a 24th Christmas party. 12 were vaccinated while 6 were not. I was the only one that had not been previously infected and it hit me the worst. All the others had very mild symptoms and recovered much faster than I did.
The vaccines were somewhat effective but not enough to justify the risk in my opinion. I am also the oldest at 74 in the group.