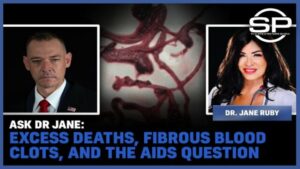 pjbikerful
The next variant has been discovered, they’re naming it – “anothercon”

spartacar1
It is Criminal that Fauci and the pundits that echo him are still in office, lying, supressing and covering facts about therapeutics that work, and how the deranged mandates have killed and injured peopel, with no one being prosecuted??? With all the lies, why is Fauci still in our face???

Donna4HealthFreedom
Stew needs to do research on HIV. AIDS is acquired immune deficiency. AIDS is not HIV. HIV does not cause AIDS. AZT, Fauci’s cure, is what caused and is still causing AIDS. The HIV scare is a cover for the vaxx because, as Dr. Ruby explained, the vaxx is causing AIDS. It has nothing to do with HIV. The test for HIV is also fraudulent. The HIV scam is no different than the COVID scam, both created by Fauci. They want you to believe that HIV is contagious and spreading. It is a cover for the vaxx causing AIDS. They already have home tests for HIV and they are working on an mRNA vaxx. You can’t make this sh*t up. Fauci needs to hang.

Cookie333
I bet Biden has paid Putin millions of dollars to “invade” Ukraine. Its all smoke and mirrors just like Afghanistan to distract from the stolen election, open border, inflation, jab deaths, etc. Obama used Russia/Ukraine. Biden doesn’t care who gets sacrificed to cover up his crimes against humanity.

Gundel
Fresh news that radioactive dust can come to Europe due to fights around Chernobyl. Smoke and mirror, they will do it with 5G and graphene. 5G towers are software directed, LA Quinta Columna already noticed IONIZING radiation around 5G towers, occasionally and usually during less busy times like dawn. The proofs and articles about it are on Orwell.city.

Ch56
Evidence on Clinton and Biden is in the Ukraine. They used the government for massive amounts of money laundering. They will now blame Russia for the power grid take down and banks. Then bingo presto you have nothing but digital currency and total enslavement.

Breeze15
So thankful I have been spared from the Shot, not a vaccination , and kept a level head. God be with us.

williamkg
The people who died of AIDS were the ones who took the medicine to help sure it. Dr. Fauci did this one too.