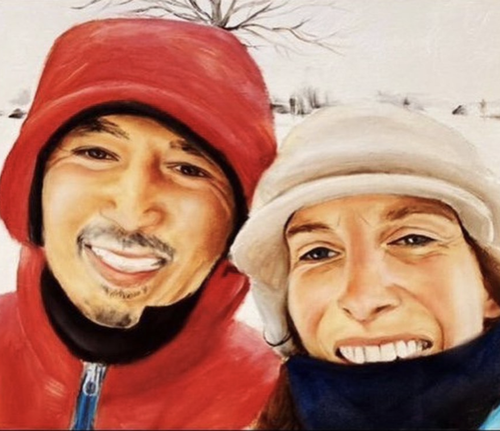 How are both 48 years old, slim. Me with previous illnesses (dialectically adjusted diabetes II, lipoedema stage I, possibly Hashimoto), my husband very athletic at a high performance level (racing bike, mouse Thati kickboxing), possibly Hashimoto At the end of June, my husband and I were vaccinated with Pfizer. For me, it was the second time (I tolerated the first very well), for my husband it was the first vaccination.

My story: 3 days after the vaccination I felt a strong pressure on my chest, it felt like an elephant was sitting on me. At the same time, there was a heartache and I don’t know how to walk five steps without breaking out in a sweat and having to sit down.

In the heart outpatient clinic of a resident cardiologist, I was immediately examined carefully (ECG, ultrasound, blood values, oxygen saturation), but all values ​​were normal. The doctor noted on the diagnosis sheet that I received after completing the treatment and that I was supposed to show my family doctor that these symptoms appeared after the vaccination, but didn’t think it was necessary to report it to the PEI because everything seemed to be fine was. She dismissed me with the words: Don’t worry, everything is okay.

My family doctor greeted me with the words: You are not the first! I already have 8 patients who are like this. And that, although I’m a small family doctor’s office! The only unusual thing is her age, the others are mostly younger, in their twenties. One can’t go up the stairs here… This Pfizer sucks, MRNA is no good. AstraZeneca is better because you can at least do something about cerebral vein thrombosis. But here… I assume it’s milder inflammation of the heart, which doesn’t show up on the ultrasound and in the EKG, you can only see that in a cardio-ECG, but no health insurance will pay for it. But it doesn’t make any difference anyway, there’s nothing else to do but rest anyway. No sport for at least half a year! And rest, lots of rest. I wrote you off sick for two weeks if it still doesn’t work, I’ll write you off sick for another two weeks. It’s not funny, you have to be very careful. But I’ll tell you very clearly, it won’t heal properly, the heart muscle doesn’t regenerate. That’s why I will definitely not give my 13-year-old daughter a Pfizer vaccination. I’ve thought about giving her AstraZeneca, but I’d be in hell if something happened.

My husband’s story: 10 days after me, i.e. 14 days after his first vaccination, he presented to the same cardiac outpatient clinic where I had also been. He also suddenly felt a strong pressure on his chest and was very exhausted. Examination resulted in the worrying diagnosis of 44mm diameter aortic root aneurysm and he was referred for a CT scan to clarify. A report to the PEI was not made here either.

The CT confirmed the diagnosis and even worse: a nodule in the lungs had been discovered. My husband received a referral for a PET-CT, which can be used to examine more closely whether it really is cancer and whether anything else can be seen.

In the meantime we were both exhausted and exhausted at home on the sofa. We could only do housework, cook food or go shopping with difficulty, mostly our children do that. The 4 floors up to our apartment were hell.

A month after the diagnosis was made, the PET-CT was performed. The doctor confirmed the nodule in the lungs and recommended an operation by specialists in Gauting. My husband also went to see the pneumologist he happened to see a year earlier, including an X-ray of his lungs (he is Japanese, in Japan a check-up is common practice for people who are white). He said that if he was his brother, he would advise him to have an operation as soon as possible and also recommended the hospital in Gauting.

In the Gauting Clinic, the surgeon then compared both CT images and came to the conclusion that, in his opinion, the results of the PET-CT gave rise to the suspicion that it might not be cancer at all, but an inflammation — he had the impression that “it” shrunk a tiny bit and advised my husband to wait and do another CT scan a month later to be able to assess the development. If it is still the same size, he would also consider an operation to be sensible.

The third (!) CT then finally showed a clear reduction, the nodule had shrunk to half of the original size. The operation was canceled and a follow-up CT 6 months later was recommended.

Months full of doctor’s appointments and CT’s are behind us. With doctors who, after understanding initially, are more and more dismissive, react with incomprehension and have no further ideas apart from a sick note. With doctors you have to beg for a blood test or you have to go to different doctors to find one who is willing to do one.

We also had to do the report to the PEI ourselves, because “It’s taking too long, I don’t have time for that” was the unanimous answer we received.

My husband’s symptoms are mainly heart, lungs, and thyroid. A second visit to the pulmonologist a month ago now also showed an inflammation in the bronchi.

For me, on the other hand, a lot seems to be happening on a hormonal and neurological level. A lot of things that caused me chronic problems even before the vaccination were intensified, and new things were added.

Below is a list of all the symptoms that I noticed in both of us and some of which appeared gradually, putting us out of action, especially in the first 4 months:

– Inflammatory heart of the lungs;

– Burning pains in limbs, soles of feet, buttocks and back;

— Bulging, painful breasts (for me, for a month and a half!);

– eczema on the face;

– Inflammation of the urethra (both of us!);

— inflammation of the vagina;

We’re doing a lot better now. We can take part in life again, can work again, and now carefully start with light sport.

Many of the symptoms now appear in flares, last 3-4 days and then subside. Other symptoms run like a red thread through the 6-month odyssey and cause us daily problems.

We feel betrayed by the medical profession. We have to fight for any diagnostics, there is no interest in enlightenment.

After a long search we have found a doctor who is critical of the vaccination and would like to try to help us in an alternative way. Of course, the costs for this are not covered by the health insurance company, you have to pay for everything out of your own pocket.

We are denied by everyone – by politicians, by doctors, by the population.

Only my husband has currently received an exemption certificate (we had to fight here too, only the third doctor had mercy), but I will certainly not get one due to the lack of a diagnosis.

PrevPreviousMy Unvaxxinated Friends ‘Were the Smart Ones’: Vaxxine-Injured Healthcare Worker Speaks Out
NextAustralian Doctor Sacked After Discovering a Massive 74% of Australian Women in Study Have Suffered MiscarriagesNext