Who is Sang Ho Baek?

Mr. Sang Ho Baek was born in South Korea, but was raised in the United States. He played high school baseball for James Bennett High School (Clippers) in Salisbury, Maryland. He is a right-handed pitcher with an 89 mph fastball. The Clippers defeated the C. Milton Wright Mustangs 5-3 on May 25, 2019 to take home the 2019 3A Maryland State Championship.

Mr. Sang signed his letter of intent to play baseball at George Mason University (Patriots) in February 2020. The so-called COVID-19 pandemic forced the NCAA to cancel most of the 2020 baseball season, including the College World Series. The Patriots were 1-14 after a 5-3 loss to Virginia Tech on March 11, 2020. The rest of the season was cancelled.

The 2021 NCAA Division I baseball season commenced on February 19. Mr. Sang, as a freshman, saw this first action against the University of Maryland, Baltimore County on March 12. He pitched 1.1 innings and struck out one batter. The three other pitchers gave up 14 earned runs. Mr. Sang gave up zero in his time at the mound. The team lost 14-10. His next action came against Saint Louis University. Mr. Sang faced two batters, struck out one and walked one. The Patriots lost 7-0.

His last action came on May 1 against Virginia Commonwealth. The season ended on May 22 and the team finished with a 14-29 record.

Who is Tommy John?

Judging from his stats, Mr. Sang had decent potential. He didn’t get much playing time in his inaugural season. Mr. Sang was the proverbial project, a guy who could turn into a good pitcher with the right coaching. He also had issues with his elbow that likely impacted his performances. Mr. Sang required a common surgery among baseball pitchers, a surgery with an interesting backstory.

World War II veteran Frank Jobe became a doctor after the war. He co-founded the Kerlan-Jobe Orthopaedic Clinic 1964-65 and became a team doctor for the Los Angeles Dodgers in 1968. Tommy John was a Major League Baseball pitcher for 26 years and six different teams. He had a 13-3 record for the L.A. Dodgers in 1974 before he felt “the strangest sensation” he’d ever experienced in his elbow.

John permanently damaged the ulnar collateral ligament (UCL) in his left elbow. The UCL is essentially 70% of the “meat” that ties together the upper and lower arm. 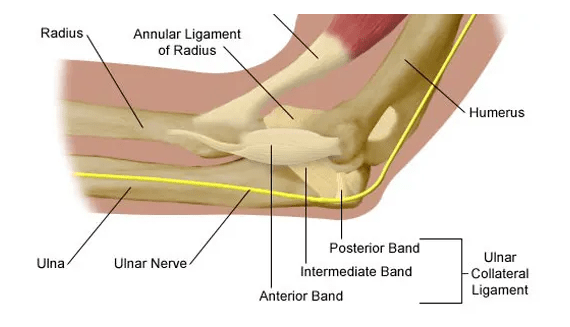 What is Tommy John Surgery?

John figured his career was over. But Dr. Jobe told John about an experimental surgery that he could try on him. John accepted, figuring he had nothing to lose since it was just elbow surgery and would not kill him. Dr. Jobe removed a tendon from John’s right forearm and used it to graft a new UCL for his left elbow.

Keep in mind this was done at a time with no MRIs and no CT scans – just X-rays. Dr. Jobe drilled holes in John’s humerus and ulna bones to attached the graft. As complex as it sounds, the entire procedure is done in 90 minutes or less. John sat out the entire 1975 season rehabilitating and praying for the best. What happened from there was a miracle at the time.

John returned to the Dodgers in 1976 and won 10 games as a starter at age 33. He had three 20-win seasons in the next four, including two with the New York Yankees. John won 164 games in his post-surgery career, with 288 wins total. He played an incredible 26 seasons, which was a record until Nolan Ryan broke it in 1993 (27 seasons). In other words, the surgery, under 1970s medical conditions, was a success. Dr. Jobe named it “Tommy John surgery” thereafter.

A total of 2,003 baseball players at all levels (professional and amateur) have had Tommy John surgery since 1974, according to baseball writer Jon Roegele. Some of them had multiple Tommy John surgeries. A 2018 study published in The American Journal of Sports Medicine found that 84% of Tommy John surgery recipients return to baseball after surgery. Granted most of said players have/had shorter careers and never quite performed the same, unlike the namesake recipient. But many of those pitchers, frankly, weren’t very good before their surgeries.

We scoured baseball history books and every internet crevice possible related to baseball. Not ONE single player in history has died from Tommy John surgery.

George Mason University announced on May 26 that all on-campus students must provide proof of vaccination against COVID-19 by August 1, 2021. The university has a website where students can schedule appointments to get the experimental Pfizer mRNA injections for free at the Johnson Center on campus.

Faculty and staff are “encouraged” to get the experimental injections. All employees were expected to disclose their vaccination status to the university through an online portal by June 11. The university also encourages everyone to get their first dose by July 4 so they can be fully vaccinated before the deadline. Non-vaxxed people must take PCR tests upwards of three times per week and wear masks at all times.

George Mason University held a vaccine clinic at EagleBank Arena in late April. Approximately 4,000 students received the first dose of experimental Moderna mRNA. The school started scheduling Pfizer appointments in late May. The NCAA has a complex system as to who pays for student athletes’ medical expenses. But ultimately the athletes’ families are stuck with the bills in many cases, whether the student athlete is on scholarship or not.

Tommy John surgery costs upwards of $50,000, including the physical therapy afterwards. NCAA baseball does not generate revenue like football and men’s basketball. So Mr. Sang’s family likely paid for a majority of his Tommy John surgery. Recipients wear a splint for up to two weeks to keep the elbow immobilized. After that they do range-of-motion exercises with a brace. It’s safe to assume that George Mason University wanted Mr. Sang working with their team trainers after surgery.

Mr. Sang had the surgery on June 8, according to the New York Times. The George Mason vaccine mandate went into effect on May 26. A two-birds-with-one-stone situation is plausible – he got the experimental injection at the same time of the surgery. He also may have received the shots before that. Bottom line, he needs to be on campus as a student athlete majoring in biology.

It’s safe to say Mr. Sang received an experimental mRNA injection. The only question is which one and when.

Let’s say, worst-case scenario, Mr. Sang got some kind of serious infection. Amputate the arm and end the threat. Again, if you believe mainstream media, Mr. Sang is the first person EVER to die of complications from Tommy John surgery.

But things get interesting when you look beyond mainstream media. Ben Upton and Dimitri Kourtis of the 11Point7 College Baseball Podcast reported that Mr. Sang died from a blood clot after Tommy John surgery. 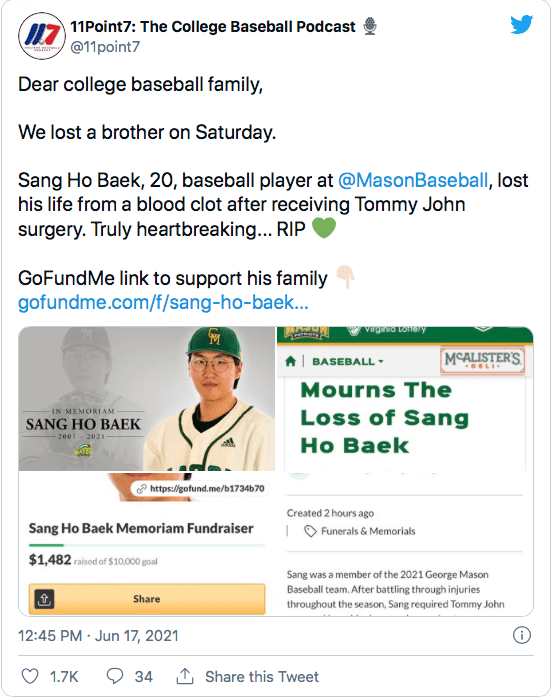 We know for a fact that both Pfizer and Moderna experimental mRNA shots cause blood clots and subsequent death. Again we scoured every baseball reference website, medical journals and even blogs. There is not ONE record of anyone developing blood clots after Tommy John surgery, let alone dying from blood clots after the surgery.

Johns Hopkins University lists the worst complications from Tommy John surgery as permanent numbness, nerve damage, or infection. Tommy John himself, in fact, experienced numbness in his left hand after his procedure. He required a second surgery to restore feeling in said hand.

Mainstream media want you to believe that Mr. Sang died from elbow surgery. No mainstream media outlet, as of publishing, even mentions blood clots. But let’s say they did. That would mean Mr. Sang developed deadly blood clots in his brain, heart or lungs because his elbow was operated on. That sounds more ridiculous than “masks stop the spread of coronavirus.”

Mr. Sang died from experimental mRNA shots. The only question is which one and how many doses he received. A GoFundMe page is raising money to help support the family.