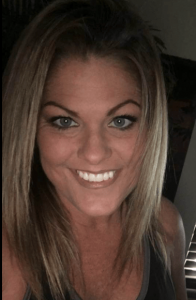 BALTIMORE — A 45-year-old mother achieved her goal of employment at one of the most prestigious universities in the world. But she never made it to her first day of work.

Ms. Robin Spring Saunders received her first injection of experimental mRNA on June 21, according to her Facebook page. It’s unclear if it was Pfizer or Moderna. But at this point, it doesn’t really matter. She apparently was not thrilled about receiving the shot. But she did it as a condition of employment at Johns Hopkins University, which mandates the experimental shots for all faculty and staff. 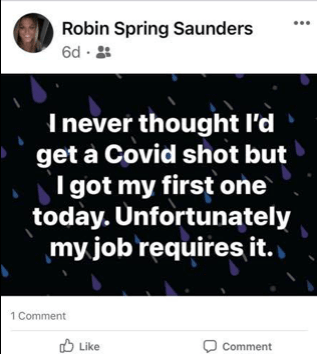 The adverse effects were almost immediate. Her cousin, Crystal Grainger, wrote on Sunday morning, June 27 that Ms. Saunders was experiencing life-threatening reactions. She was on a ventilator and suffered from brain and heart issues.

Ms. Grainger, as some others have reported, said the reaction came after the second injection. But that would mean Ms. Saunders received two shots in less than a week, which is highly unlikely and very dangerous. Several family members and friends confirmed it was the first shot.

The damage was too severe to overcome. Ms. Autumn Harvey, Robin’s daughter, confirmed that her mother passed away later that afternoon. Several others confirmed her death thereafter. 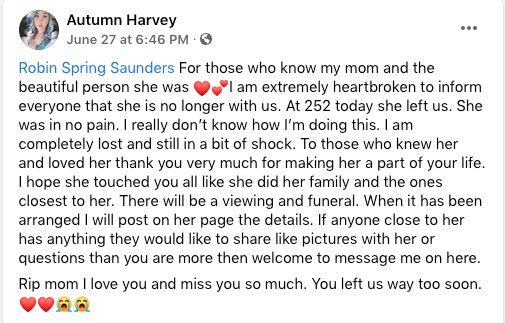 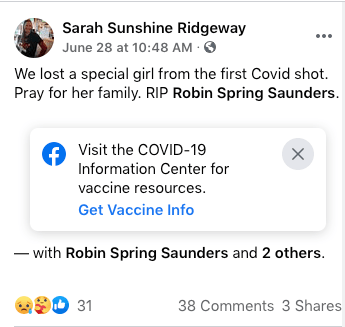 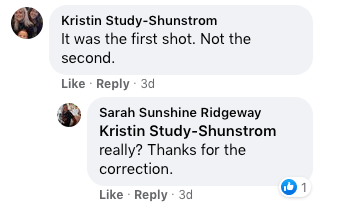 From dream to nightmare

It appears Ms. Saunders wanted to work with autistic children and earned credentials to do so. Her Facebook page indicates that she bootstrapped her way to the Johns Hopkins opportunity. She was working several jobs at the time, including Home Depot, Lowe’s and Amazon. She was hired at Johns Hopkins University to fulfill her midlife goal.

Several friends and family members talked about filing a lawsuit against Johns Hopkins. It will be interesting to see if they follow through. Ms. Saunders is survived by her mother and daughter.