The devastated husband of a marketing executive who died of a stroke caused by the Oxford/AstraZeneca Covid jab has demanded that the Government compensate the nearly 80 families who lost loved ones to vaccine-induced blood clots, following his wife’s inquest.

Nicola Weideling suffered catastrophic bleeds on her brain after being hospitalised with blood clots caused by the vaccine which she had received 24 days before dying, a coroner has ruled.

The 45-year-old Oxford University Press executive had complained to her GP about neck pain but she was not diagnosed with vaccine side effects until she was taken to hospital with several other symptoms of blood clots.

Speaking after his late wife’s inquest at Hampshire Coroners Court in Winchester, Kurt Weideling said ministers now need to follow through on their promise to pay affected families £120,000 under the Vaccine Damage Payment programme.

Her family insist those like Mrs Weideling who lost their lives after ‘doing the right thing’ and getting vaccinated should not simply be dismissed as ‘collateral damage’.

The distraught 52-year-old IT manager said: ‘My fundamental problem here is this country is the only Western country I know of which decided it was safe to give this vaccine to people over the age of 40.

‘This is even after other people had already died from blood clots, and they still kept going.

‘I accept there is a delicate balance to be struck between the benefits of the vaccine and the risks but no other country would have given my wife that vaccine.

‘Seventy people have died in the UK from this side effect. Hundreds of people have life changing disabilities because of it.

‘They set up the Vaccine Damage Payment but have not paid out to anyone for Covid vaccinations.

‘There are families where the main breadwinner has died or has been left with brain damage and needs lifelong care. Everyone goes “oh well there are always side effects”, but we weren’t really given a choice. You had to do the right thing.

The court heard Nicola had her first Covid-19 vaccine on April 21, 2021, and received the AstraZeneca injection, despite reported cases of people suffering devastating blood clots as a result of its side effects.

After a few days she started to complain of neck pain and had a telephone consultation with her GP on May 6, but at this stage it was believed to be ‘muscular’.

Mrs Weideling was taken to Royal Hampshire County Hospital two days later, after her symptoms of headaches and bruising developed.

Giving evidence to the inquest, Mr Weideling said: ‘An ambulance came and took her to the hospital in Winchester.

‘I wasn’t allowed in but we were chatting on our phones and she was diagnosed pretty quickly within an hour or two. She said “I have been told I have the blood clots associated with the AstraZeneca vaccine”.’

Mrs Weideling was given a CT scan of her head which revealed clots and she was ‘urgently transferred’ by ambulance to University Hospital Southampton, the local specialist hospital for these cases.

Mr Weideling, who was married to his wife for 22 years, added: ‘She was transferred to Southampton and on Sunday and Monday she was responding, she was fine and chatty.’

But Nicola stopped responding to texts on Tuesday and Wednesday, prompting Mr Weideling to call the hospital.

‘Then I had a call back from the hospital and they said she’s had a significant brain bleed and she never regained consciousness after that,’ he said.

‘They did surgery but on Thursday they said there’s been another bleed and there’s nothing they could do.’

A post-mortem examination showed Mrs Weideling died on May 15, 2021 after suffering a stroke caused by Vaccine-Induced Immune Thrombotic Thrombocytopenia (VITT), otherwise known as blood clots caused by a vaccine.

Jason Pegg, area coroner for Hampshire, said: ‘Nicola was only 45 at the time of her death.

‘She was a very thoughtful and kind lady, she was the hub of the social life in the circle of family and friends and someone who enjoyed a successful career. She was a very much-loved wife and sister.

‘Globally, we have been plagued with the Covid-19 pandemic and we in this country had the fortune to be offered vaccinations.

‘I have heard evidence today that Nicola was someone keen to get her first vaccine.

‘With the benefit of hindsight, it seems to me that the symptoms of pain in Nicola’s neck were more likely than not to be associated with [blood clots].

‘Nicola was somebody who did succumb to blood clots. Nicola developed cerebral blood clots in consequence to her Covid-19 vaccination. A rare but recognised complication of the vaccination which led to a cerebral infarction [stroke].’

Mr Weideling paid tribute to his wife during his evidence, adding she was ‘a supporter and believer in getting vaccinated. She went on the first or second day she was eligible for her age group to get vaccinated’.

‘Nicola was kind of the hub of every social interaction. She was always organising parties and events and holidays for people and catch ups and family get togethers,’ he said.

‘I’m from Australia, she’s from here. We lived together in Australia, America and the UK and she was always the one who kept in contact with people.

‘She was also very professionally driven. She had just had a big promotion in her job at Oxford University Press. She was very proud about that.’

Speaking after the inquest, Nicola’s sister, Liz Young, 42, added: ‘She was a very thoughtful and kind person.

According to the British Heart Foundation, as of February 23, 2022, there were 438 reports of people developing blood clots after receiving a dose of the AstraZeneca vaccine in the UK.

Of the 438 people who developed blood clots, 79 died. Six of these deaths occurred after the second dose.

Up to 920 compensation applications have been filed by people who were left seriously injured after getting the Covid-19 vaccine as claims could hit £110million.

The Vaccine Damage Payment Scheme (VDPS) allows people who are allegedly severely disabled due to a vaccination to claim a one-off tax-free payment of £120,000.

Family members of someone who has died after becoming disabled because of what they claim is the vaccination are also eligible to apply for the fixed payout.

It has emerged that the bill paid to those left with life-changing injuries from the Covid-19 vaccine or the families of those who died after getting the jab could top £110million, The Times reported. 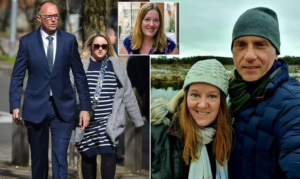