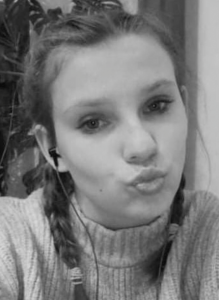 HOLLFELD, BAVARIA — A 15-year-old German girl is dead, and her mother appears to be taking accountability for allowing this to happen.

Ms. Cheyenne Braun received her second Pfizer mRNA injection on or around November 1, according to her mother, Kerstin Braun. Kerstin and her older daughter specifically said that the shot was “Comirnaty BioNTech.”

The U.S. Food and Drug Administration (FDA) allegedly fully-approved the Pfizer Comirnaty-branded injection in August despite said brand not being available in the United States. But Comirnaty has been available in Europe since December 2020. Regardless, nobody really know what’s going on in the U.S. regarding Pfizer vs. Comirnaty.

A November 8 FDA “Summary Basis for Regulatory Action” says it recommends approval of Cormiraty in the U.S., which supposedly already happened this past summer. The FDA admitted in the document that the BNT162b2 injections (Pfizer) are different from Comirnaty due to “the presence of optimized codons to improve antigen expression” in the latter.

A codon is a trinucleotide sequence of DNA or RNA that corresponds to a specific amino acid. The FDA also admitted in the November 8 document that Pfizer/BioNTech have 10 ongoing clinical studies for the injections that have completion dates as late as 2025.

Kerstin posted a cryptic message on November 4, implying that something was very wrong in her life.

Note that all of these posts are translated from German to English, and may not be perfect. Kerstin posted another update on November 6 that wished “my daughter Cheyenne survives all this.” Ms. Braun bravely and gallantly confronted the truth about the entire matter. She told everyone what was actually happening to Cheyenne that day. Ms. Braun warned everyone to “think twice” about allowing their kids to be injected. She also said she regretted signing off on the injections despite Cheyenne really wanting the shots so she could return to normal life. 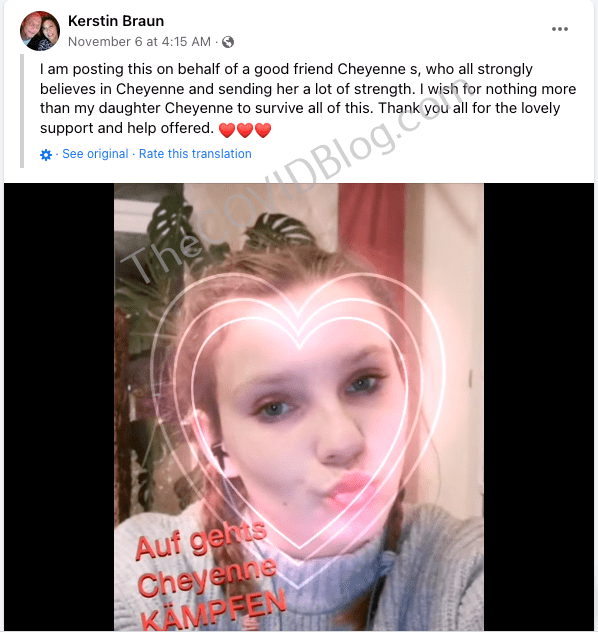 Ms. Braun announced on November 16 that Cheyenne passed away that morning.

Ms. Braun re-posted a note from her older daughter, who is a nurse, on November 17. Cheyenne’s heart attack was so massive that only “machines” kept her alive for two weeks thereafter. 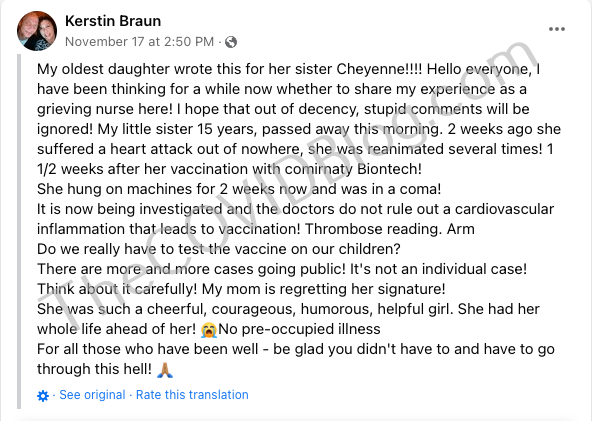 It’s gut-wrenching reading all of Kerstin’s posts because she knows that her signature gave permission to inject Cheyenne. But again, she did it because Cheyenne was an outgoing young lady who needed the injections to live a normal kid life due to dystopian laws and regulations in Germany.

There’s apparently some sort of “police investigation” related to Cheyenne’s death. “There is currently no new information,” an Upper Franconian Police spokesperson told the regional newspaper Bayreuther Tagblatt. “The results of the ongoing investigation remain to be seen. Until then, we cannot speculate on cause of death.” The Paul Ehrlich Institute, Germany’s FDA equivalent, also provided the Bayreuther Tagblatt some gobbledygook statement that isn’t even worth republishing here.

Cheyenne would have turned 16 last week.