By Katie Weston and Joe Davies

BBC presenter Lisa Shaw died due to complications from the AstraZeneca vaccine, a coroner concluded today in what is believed to be the first time a Covid jab has officially been ruled the underlying cause of death in the UK.

The otherwise healthy 44-year-old, who worked for BBC Radio Newcastle, died in May after developing headaches following her first dose of the British-made vaccine.

Coroner Karen Dilks heard Ms Shaw suffered from blood clots in her brain which caused a deadly stroke. She passed away at the Royal Victoria Infirmary in Newcastle three weeks after the injection.

The inquest, which lasted less than an hour, heard that the condition linked to the AstraZeneca vaccine was extremely rare.

Overall there have been 417 cases of blood clotting after the AstraZeneca vaccine out of nearly 50million doses administered, according to the UK’s medical watchdog.

The Medicines and Healthcare products Regulatory Agency (MHRA) said the rate of the condition was about 15 per million injections.

Seventy-two Britons have died as a result of the complication but Ms Shaw’s case is believed to be the first to be officially attributed to the jab by a coroner.

The clotting disorder, which appears to occur at a higher rate among young people, prompted UK health chiefs to recommend all under-40s get Pfizer or Moderna instead.

But research since the decision was taken to restrict AstraZeneca’s jab’s use suggests the risk of clots is actually higher from Covid infection itself compared to vaccination. 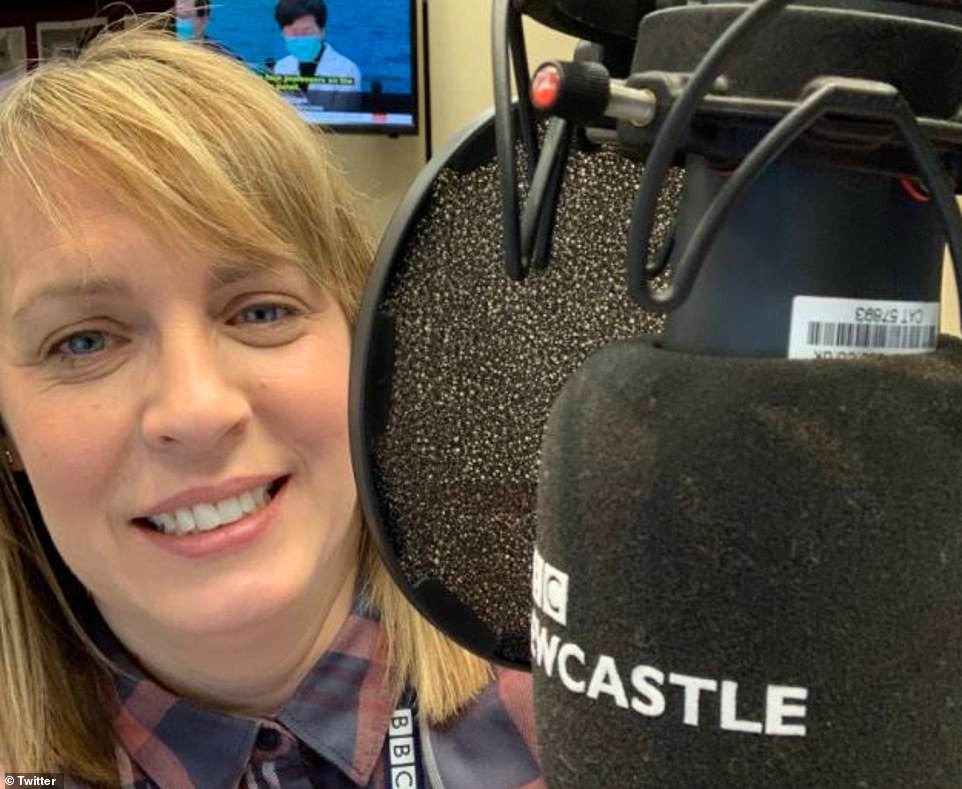 BBC radio presenter Lisa Shaw (pictured above), 44, died at the Royal Victoria Infirmary in the city just over three weeks after her first dose of the vaccine, heard coroner Karen Dilks 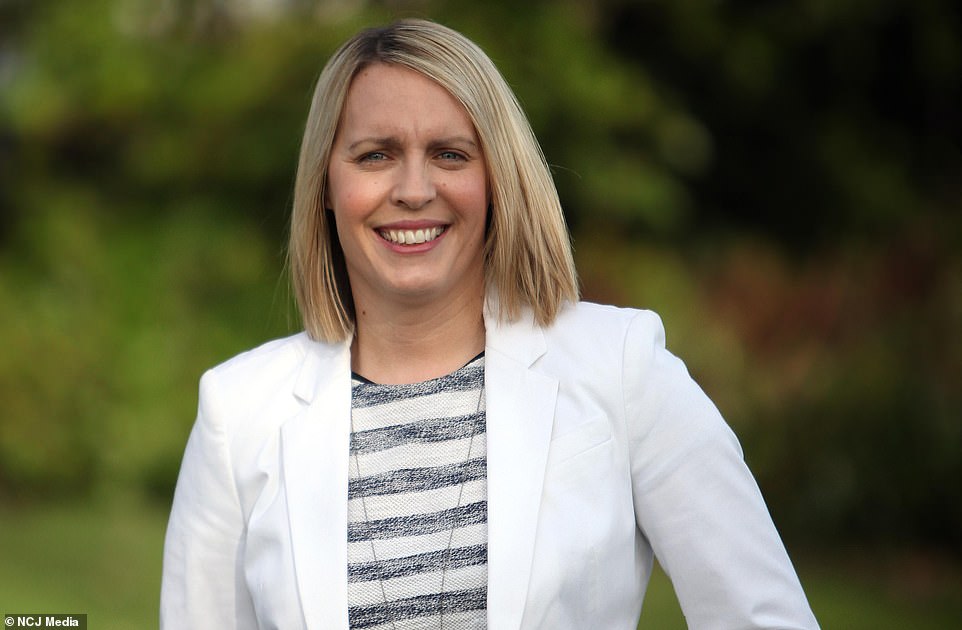 An inquest, which lasted less than an hour, was told Ms Shaw (above) was admitted to hospital after she complained of headaches and doctors found a haemorrhage on her brain
In a statement issued after the hearing, Shaw’s family said: ‘This is another difficult day in what has been a devastating time for us.

‘The death of our beloved Lisa has left a terrible void in our family and in our lives.

‘She truly was the most wonderful wife, mum, daughter, sister and friend.

‘We have said all we want to say in public at this time and ask to be left alone to grieve and rebuild our lives in private. Thank you.’

Shaw, who was not known to have any underlying health problems, developed ‘severe’ headaches a week after having the jab and fell seriously ill a few days later.

Her relatives previously said: ‘She was treated by the RVI’s [Royal Victoria Infirmary] intensive care team for blood clots and bleeding in her head.

‘Tragically she passed away, surrounded by her family, on Friday afternoon. We are devastated and there is a Lisa-shaped hole in our lives that can never be filled. We will love and miss her always.

‘It’s been a huge comfort to see how loved she was by everyone whose lives she touched, and we ask for privacy at this time to allow us to grieve as a family.’

Shaw’s husband, Gareth Eve, also attended the inquest with other members of the family.

The inquest heard Shaw — a mother-of-one from Consett, County Durham — went to the University Hospital of North Durham on May 13 after complaining of a severe headache, including shooting pains across her forehead and behind her eyes.

The coroner said Shaw had previously complained about pain all over her head.

After a CT scan revealed a venous sinus thrombosis, a decision was taken to transfer her to the Royal Victoria, the hearing was told.

Dr Christopher Johnson, a consultant in anaesthetics and intensive care at the hospital, told the inquest at Newcastle Coroner’s Court that Ms Shaw was initially treated with anti-coagulants but an operation was undertaken to relieve the pressure on her brain after bleeding was detected.

But Dr Johnson said the surgery could not help with the underlying cause of the haemorrhage and the risks were too great to try to remove the clot ‘manually’.

The consultant said Ms Shaw’s treatment was determined in consultation with a national panel of experts which convened daily.

‘This was one of the first cases of this kind of vaccine-induced immune thrombocytopenia and thrombosis I had seen and had been seen nationally,’ he said.

Asked whether his team were of the view that the ‘underlying cause of the events that tragically affected Lisa was complications of the AstraZeneca vaccine’, Dr Johnson said: ‘We were, yes.’

Asked by the coroner if the team at the Royal Victoria had reviewed their care of Ms Shaw, the consultant said the treatments given and the sequences of treatments was now nationally recognised practice.

He added: ‘I do not think there was anything anyone could have done differently. If we had the same presentation tomorrow, we would do the same.’

Pathologist Tuomo Polvikoski told the inquest that Lisa had been fit and healthy before receiving the vaccine, saying it ‘seemed quite surprising she developed that kind of thrombosis’.

Asked about the underlying cause of the fatal clotting on her brain, Dr Polvikoski said the clinical evidence ‘strongly supports the idea that it was, indeed, vaccine induced’.

He added: ‘Based on available clinical information, it seems to be the most likely explanation.’

The BBC said in a statement: ‘We are all completely heartbroken, in disbelief, numb, and saddened, that there is a Lisa-shaped hole in our lives that will never, ever be filled.

‘We are so grateful for the time that we have had with her, and there are so many happy memories that we will hold dear for the rest of our lives.

‘She was the best wife and mammy, sister, daughter, aunty, friend and colleague that anyone could hope for.’

The corporation added: ‘She loved connecting every day with the wonderful people of the North East, and it gives us great comfort to know how many lives she was an integral part of every single day.

‘We’d like to thank everyone for the overwhelming love and support we have received at such a difficult time, reinforcing how deeply cherished she was by so many people. We will love and miss her, always.’

Researchers insist the link between blood clots and AstraZeneca’s Covid vaccine is rare, with the side effect thought to affect just one in 50,000 under-50s who are given the British-made jab.

Of those, 23 per cent died because of vaccine-induced immune thrombocytopenia and thrombosis (VITT) — the name of the side effect.

Experts claimed it was deadlier than other similar clotting disorders.

Thrombocytopenia is a condition where the patient has a low count of cells that help the blood clot, known as platelets. Thrombosis occurs when blood clots block veins or arteries, and is a major cause of strokes and heart attacks.

No clots have been seen for over a month, academics at Oxford University Hospitals NHS Foundation Trust also revealed. But this is mainly because no-one is getting the first dose of the vaccine anymore.

The risk of developing VITT from the second jab — given eight to 12 weeks after the first — is significantly lower.

For this reason, the researchers who investigated the link argued a third dose would probably carry an even smaller risk of blood clots.

Scientists compared rates of thrombosis among more than 1.3million recipients of either jab in Spain.

Scientists compared rates of thrombosis among more than 1.3million recipients of either jab in Spain. 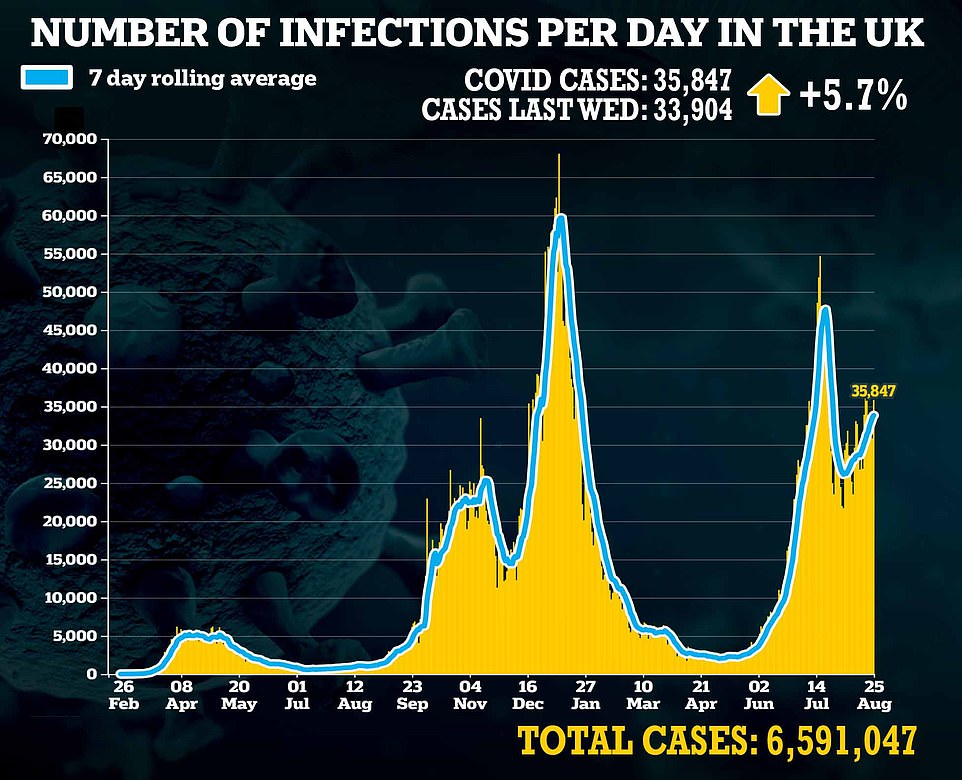 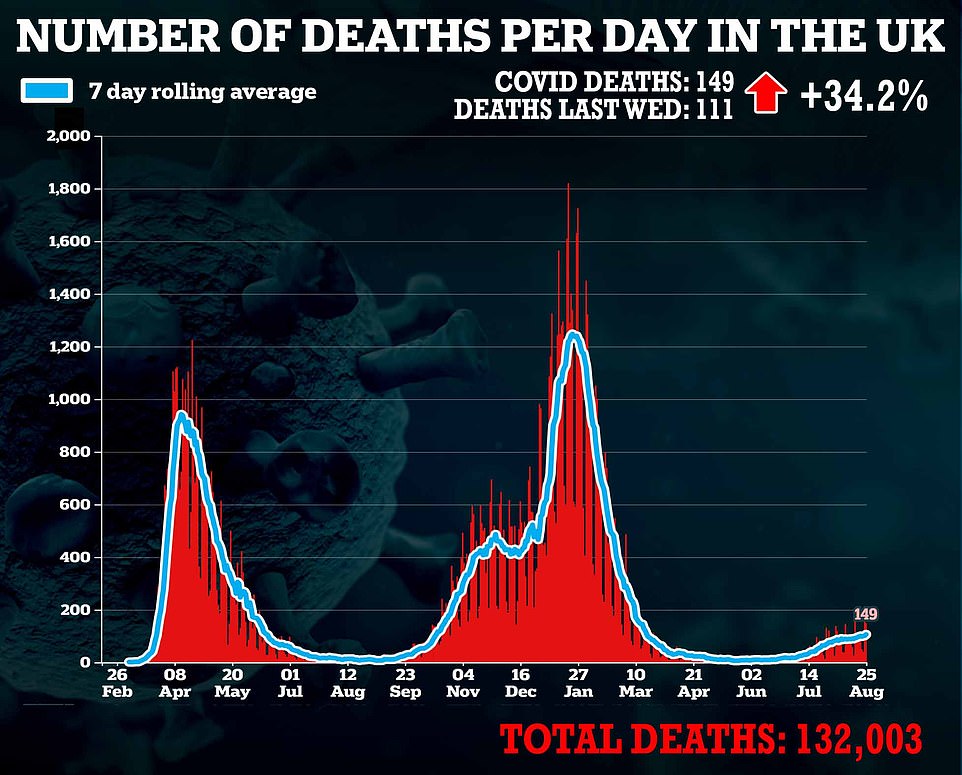 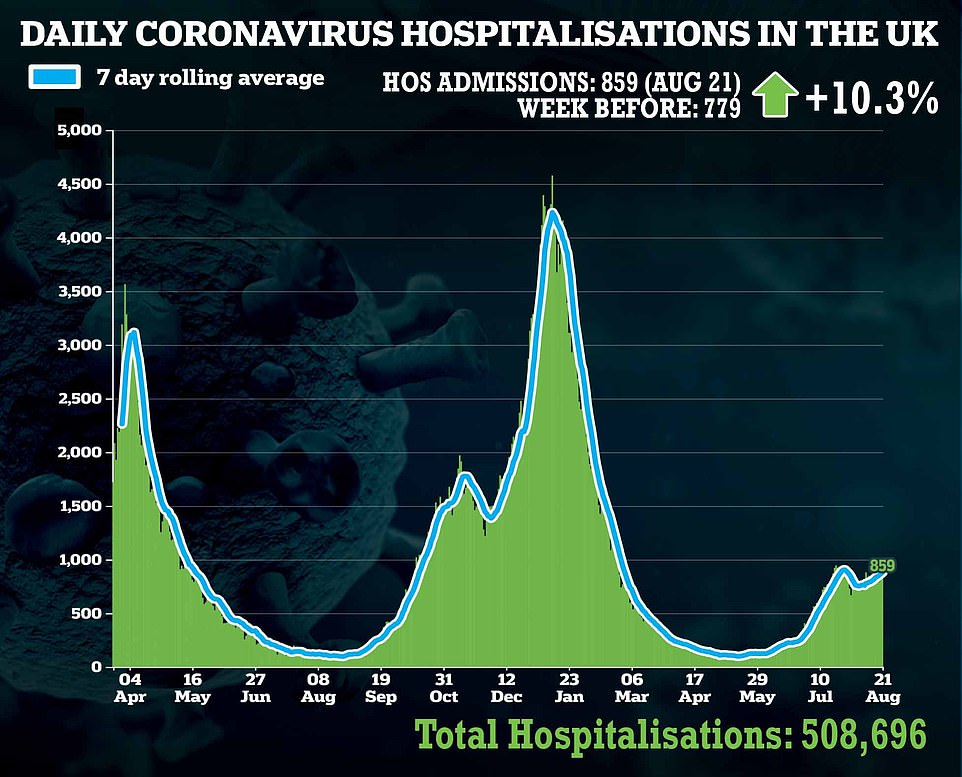 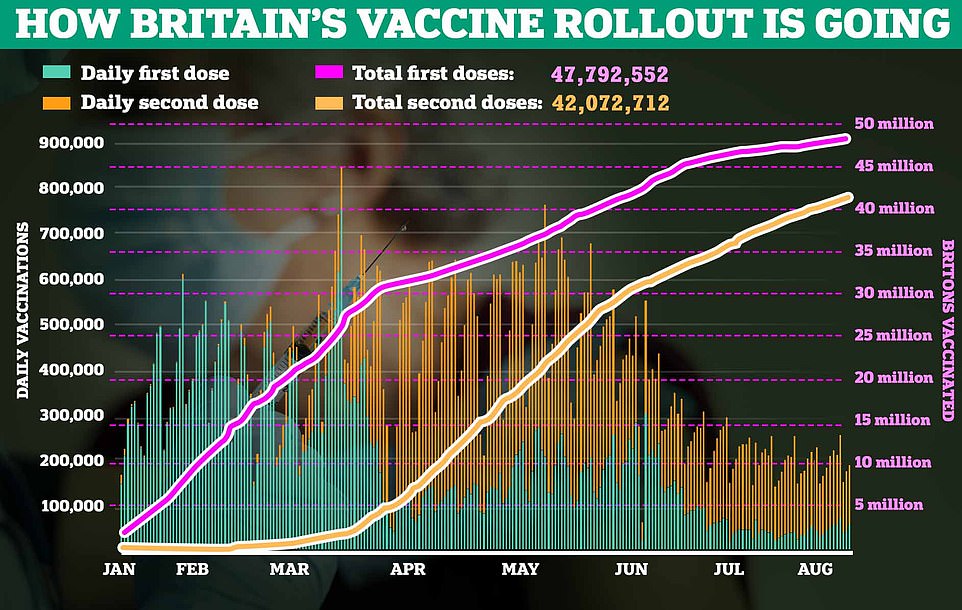 Both vaccines came with a tiny risk of causing blood clots, with scientists branding their safety profiles ‘broadly similar’. Pfizer’s jab may even be more likely to trigger the rare blood-clotting complication, the data suggested.

In contrast, the virus itself was eight times more likely to lead to thromboembolism than either jab.

The findings go against an array of research saying the opposite, with health chiefs yet to uncover a link between Pfizer’s vaccine and blood clots.

Top scientists insisted the jab was safe and would save thousands of lives, leading to claims the bloc heavyweights were using the vaccine to play post-Brexit politics.

In light of the new findings, one UK Government official accused European leaders of having ‘blood on their hands’ for trashing the life-saving jab.

In an earlier statement, an MHRA spokesperson said: ‘We are saddened to hear about the death of Lisa Shaw and our thoughts are with her family.

‘As with any serious suspected adverse reaction, reports with a fatal outcome are fully evaluated by the MHRA, including an assessment of post-mortem details if available.

‘Our detailed and rigorous review into reports of blood clots occurring together with thrombocytopenia is ongoing.’

Shaw previously worked in commercial radio and won a Sony Gold Award in 2012 for the breakfast show she hosted on Real Radio with co-host Gary Philipson.

Rik Martin, acting executive editor at BBC Radio Newcastle, said at the time of her death: ‘Everyone at the station is devastated and thinking about Lisa’s lovely family.

‘She was a trusted colleague, a brilliant presenter, a wonderful friend, and a loving wife and mum. She loved being on the radio and was loved by our audiences.

‘We’ve lost someone special who meant a great deal to a great many people.’

Chris Burns, head of BBC Local Radio, added: ‘Lisa was a talented presenter who had already achieved a lot and would have achieved much more.’

UK regulators saw 411 instances of vaccine-induced immune thrombocytopenia and thrombosis after AstraZeneca’s jab up to July 28.

A total of 43 cases occurred after a second dose.

At that time, 24.8million Britons had received their first AstraZeneca jab and 23.6m had already been fully-vaccinated.

PrevPreviousA Healthy 46-Year-Old Man Dies in One Minute After the Syringe was Injected
NextFuneral Director, I’m Looking After the Terrible Mistake, Most Deaths Are VaxinatedNext