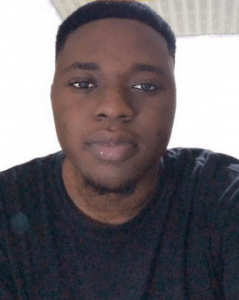 ACCRA — A 20-year-old Ghanaian political science student is dead, in a story that shines a spotlight on a disturbing trend we’ve noticed in the last two months.

A man identified via his Twitter handle as Jashua Wonder tweeted a video that went viral on December 15. He claimed that one of his college roommates from the University of Legon died that morning after receiving an mRNA or viral vector DNA injection “two days ago.” Wonder identified the roommate as 20-year-old Albert Owusu Sarpong. It’s unclear which injection Mr. Sarpong received. The big three, plus Sputnik V (Russia) and AstraZeneca, are all available in Ghana. Only 5% of Ghana’s 32 million citizens are “fully vaccinated” as of publishing.

The viral video is below.

Several websites and Telegram accounts helped the video go viral. But there appears to be more to the story that was readily available for anyone to report.

Timeline and other facts disputed

There is in fact a Legon campus for the University of Ghana. It’s essentially like calling the University of California Berkeley, “The University of Berkeley,” which is technically incorrect. It’s a stretch and a bit petty to discredit the entire story just because of that. But some other facts were left out of the numerous blog and social media posts about Mr. Sarpong’s death.

Yen.com.gh, a Ghanaian online newspaper, indicated that Mr. Sarpong did not die on campus and thus, Jashua Wonder was not with him when he passed away. Further, another Twitter user responded that their little brother was Mr. Sarpong’s best friend. They said Mr. Sarpong, “was sick for three weeks” and then passed away. 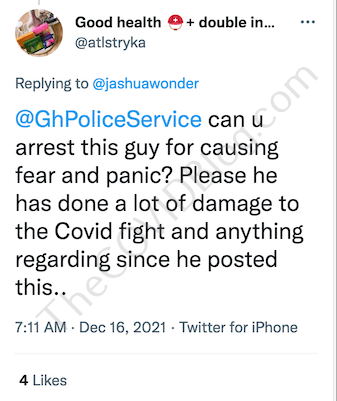 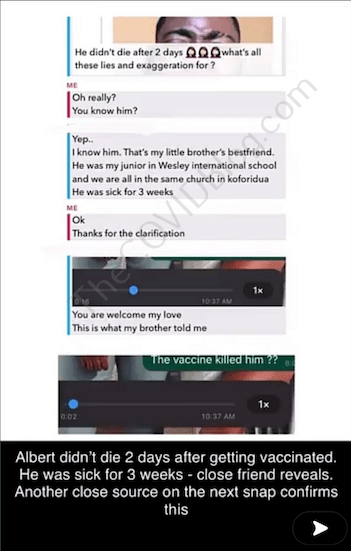 We reached out to the foregoing Twitter user. But they did not respond as of publishing. Jashua Wonder neither disputed nor responded to the post despite it being a direct response and challenge to his viral video.

Regardless, thousands of tweets with the #JusticeForAlbert hashtag appeared in the two days following Jashua Wonder’s video. Many of said tweets are from Ghanaians who recently received an injection and are now fearful as to what might happen to them. One user reported that a friend of his also died shortly after receiving a COVID-19 “vaccine.”

PrevPreviousLouisiana Nurse Blows the Whistle: “We Have Had More Children Die From the C0V Vaxxine Than of C0VID Itself”
Next3 Football Players Died of Heart Attacks in the Last 5 DaysNext