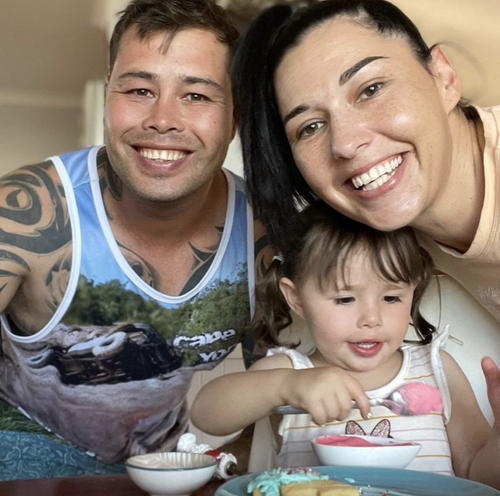 My name is Prue. I’m a thirty-two-year-old mum from Hervey Bay. I had my first Pfizer jab on December 2nd 2021 and the second on December 23rd, 2021 to keep my job. Originally I was super firm on not getting it at all. I eve decided I’d stay at home and not work if I had to. However, with my partner’s recent bad back, it was inevitable I’d need to continue toward I also have a history of cancer and have had open-heart surgery as a child. My family and I have experienced serious illness as I was diagnosed with cancer just six weeks after my first baby was born. She’s now three.

I’m sure there’s a little trauma from being so sick and the thought of being bedridden again gives me anxiety. I’m 2 1/2 years in remission and I worked very hard to recover and get my body healthy and strong. I was hesitant with the jab as the last thing that I wanted was to get seriously ill. As a family, we had been through enough and it took one and a half years to feel normal again. I was worried that a rushed jab in its trial would take away everything. Most people were dismissive of my concern. Even my own mother. I begged two doctors for an exemption, referring to the open-heart surgery I had as a young child and my history of lymphoma. I was declined.

I tried to get in the car to go and get the jab twice in time for the Queensland mandate. However, I just couldn’t physically walk to the car, get in, and go and do it. The third attempt, my partner took me. I tried to keep my composure going to the clinic. It was strange I wasn’t hyperventilating. I was just sad. Here I was flying the white flag I was so adamant I wouldn’t do. When I got there, tears just leaked from my eyes. I was trying my hardest not to cry because I felt embarrassed and I’m not a big crier but my body was telling me to get the fuck out of there. The nurse was emotionless. She didn’t ask me if I was okay or if I was sure if I wanted to go ahead. She injected me and sent me into the waiting room. It was like I was just another number dosing up. I felt shame and disappointed that I wasn’t strong enough to not do it but it meant putting my family under financial pressure.

Since my first jab, I felt fluttering “pinchy” pain and a dull ache in the left hand side of my chest/heart (same location as my lymphoma) the very next day. I thought it may have been scar tissue from cancer as I sometimes get it.

After my second Pfizer jab, the symptoms intensified, and slowly continued to do so. I had trouble getting into the GP over the Christmas holidays so the next available appointment was a least two weeks away so I booked it and had to wait.

It then started to scare me. On the evening of January 4th 2022, I went to the emergency department in my home town. It was so busy and over the space of two hours, one person was called into the emergency department and there were at least twenty in the waiting room. I observed two teenage boys who were having jab reactions that night. I decided it was best to go home and rest and come back the next morning. I went in and I told the nurse at the admin I was having a sharp dull pinchy chest pain since my first jab and that it had intensified after the second jab. After a couple of hours, I got in and was treated in another waiting room of the emergency department. My doctor was lovely he ordered a chest x-ray, bloods, and an ECG. Once they were completed, he came back and said to me that I had a reaction to the Pfizer vaccine. He told me that I had jab induced pericarditis. We talked a little about it and then he said: “Google Pfizer Jab” we’re his exact words. It got me thinking: “It can’t be too uncommon, hey?”

I feel sick to my stomach with guilt, shame, and regret. All I can think about his how stupid I feel and wish I listened to my gut. I have deep regret. I’m angry. I’m frightened and scared I might have to deal with a serious illness all over again when I felt perfectly fine before having it. I begged for an exemption from my haematologist for what I would say was definitely a valid argument and was declined. All I wanted was time and more study. That’s all.

I should not have ever had to experience any of this. I should not have to be feeling any of these emotions. I have gone from being very active, healthy, and doing one and half hour gym sessions at least four times a week to just trying to get through the working week without calling in sick. I manage some light home duties but otherwise if I do too much my chest pain flares up. I feel so exhausted easily and pretty much permanently. I get short breath. I am now on heart medication with no idea how long or how serious this will be. I’m sharing my story as these rations are not rare! All this for 98% survival rate. I would have preferred to take my chances with COVID-19. At least that would’ve been my choice. Consider stories like this before deciding what is best for your child.

Thanks for your time.